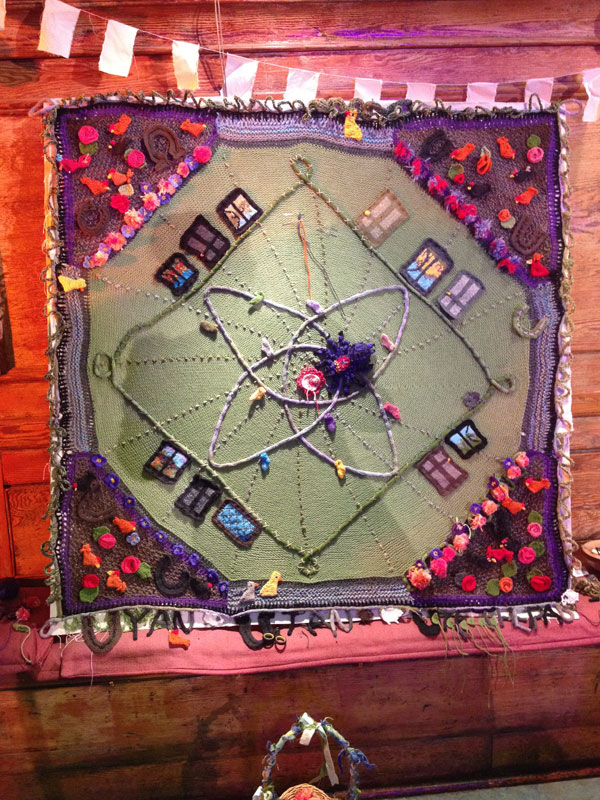 Last night I took part in the Yan Tan Tethera event at the English Folk Song and Dance Society in Cecil Sharp House. It’s an exhibition exploring the connections between textiles and song. Read more here.

I was a part of the Prick Your Finger section of the event. We were creating a knitted mandala featuring charms based on traditional English folk songs. People came and knitted and crocheted chickens, flowers, ducks, sheep, windows, doors and tiny socks whilst two choirs sang folk songs related to textiles. There were also knot dances where people created knots by dancing with colourful ribbons on bobbins, similar to a maypole dance.

I loved listening to the song Tarry Wool as it has a lot of lyrics about carding wool. I’ve been doing a lot of carding recently and have fallen in love with the process of combing and combining different fibres.

The folk mandala was the work of Rachael Matthews (who runs Prick Your Finger). I did a lot of the knitting to create the background. That big circle of green took a little while…! We made a booklet to go alongside the project which contains patterns for the charms and words to the songs. It’s called Yan Tan Tethera’s guide to knitted meditation through folk song and it’s a beautiful object by itself. I was very excited to contribute patterns for tiny socks and naughty sheep.

The exhibition will be at Cecil Sharp House until September 25th 2014. So you can go and investigate all the different works. There’s also pieces by Freddie Robins, Stewart Easton and the Mcgrath Maker’s Group.

Also, in case you were wondering, Yan Tan Tethera is an ancient method for counting sheep and also stitches in knitting. Here’s the wikipedia page if you want to learn all the numbers. 15 is bumfitt which I think is a great reason to start using it to count everything…!